Take a walk around our town square and enjoy a piece of history.  It is lined with historical buildings.  Beautiful brick buildings with plenty of charm & character.  Some buildings are weathered and worn, others are being repaired and restored.

Immigrants from Kentucky, Tennessee, and the Carolinas, began to settle here and Greenfield grew.  The town square began to grow as well.  The Greenfield Opera House, which opened in 1888, was known as the “Jewel of the Square”.  The square is lined with buildings built in the 1880s from bricks made in the Greenfield Brickyard.  Also, located on the square was the Washington Hotel built in 1882, it was the first place in town to have a flushing indoor toilet and ceiling fan. The Hotel was host to many travelers, after WWI the business waned and the Hotel was neglected due to profit decrease.  In the late 1960s it was closed and further decayed and fell to ruin.  Decades later the hotel was destroyed.

Because many of the buildings still stand, a post office called Greenfield has been in business since 1850.   The Greenfield High School was opened in 1889 and is the oldest high school in Southwest Missouri.  Three churches still used for worship were built in the late 1800s and early 1900s. 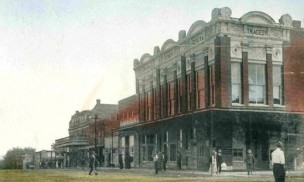